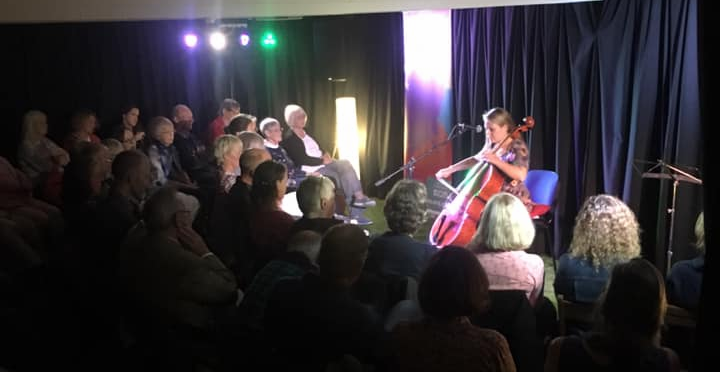 Following an extraordinary voyage over sea to Iceland, via Orkney, Shetland and the Faroes, undertaken in collaboration with Sophie Ramsay, cellist and singer Sarah Smout has now returned home to Craven where she is currently working on creating a performance which captures this journey, Throughout their trip they recorded a variety of “soundbites”, from winds howling, storms at sea, local music and seabirds which will be interwoven with music and poetry inspired by their journey.

The performance at The Joinery was a taster of this ongoing work and proved to be totally enthralling. Sarah’s work is both informed and driven by her deep concerns for the environment and humankind’s impact upon the natural world and is a striking blend of unique poetry, careful observation and skilled musicianship. This was immediately apparent from her opening track, “Atlas”, a spell-binding composition which views the world through the eyes of a migrating bird who witnesses the growth of the oceans and the gradual disappearance of the ancient forests of the world. Her ethereal singing voice is particularly suited to this kind of haunting number and this was shown again and again throughout the evening.

Not all the music featured was of her own composition and this enhanced the programme as it showed a range of varied responses to the landscapes encountered. Particularly interesting was the song from Hoy, Orkney, the beautiful “Rackwick Bay”. This was taught to them by John Budge, who had lived there all his life and the song focuses on the feelings of someone leaving the island and a love behind and how both the landscape and emotions become intertwined. This theme was returned to in a number of tracks, not least in Skara Brae where the relationship between past and present was examined and the notion that home is more than just bricks and walls but is a concept. This was especially enhanced by the evocative and expressive Cello playing. At many points in the evening it felt as if the music itself was the tide washing over the audience and transporting them to other times and distant shores. One sea-scape however was unforgettable in its ferocity as the trip between the Shetlands and Faroes was marked by an extremely stormy crossing.

The sense of this was captured perfectly in Dougie Maclean’s composition “Ready for the Storm” with the soundtrack becoming increasing frenetic. Throughout the evening’s performance Sarah manages to bring to vivid life the variety of landscapes and the communities who inhabit them, from cries of seabirds and their pattering feet through to the howling gales and the harmonies of traditional songs, achieving wonderful and entrancing effects through her use of looped cello, song and poetry but most of all it is her clarity of vision which reaches out to the audience to draw them into her view of the world.

Interested in the themes explored in Returning Home? Don’t miss our screening Of Fish & Foe.