Storytelling quotes to live by

The power of storytelling is universal

We love a good quote at Settle Stories. Below are our staff’s favourite, followed by an extensive list for you to choose from for yourselves.

“‘Without stories, we wouldn’t be human beings at all’  – Philip Pullman

“Inside each of us is a natural-born storyteller, waiting to be released.” – Robin Moore

“If history were taught in the form of stories, it would never be forgotten.” Rudyard Kipling

More quotes that we love here at Settle Stories:

“The art of storytelling is reaching its end because the epic side of truth, wisdom, is dying out.” – Walter Benhamin

“Storytelling is fine as long as you can encourage people to act on the stories.” – Karen Armstrong

“Storytelling is the essential human activity. The harder the situation, the more essential it is.” – Tim O’Brien

“Storytelling reveals meaning without committing the error of defining it.” – Hannah Arendt

“The destiny of the world is determined less by the battles that are lost and won than by the stories it loves and believes in.” – Harold Goddard

“Story is the vehicle we use to make sense of our lives in a world that often defies logic.”- Jim Trelease

“The folktale is the primer of the picture-language of the soul.” – Joseph Campbell

“As we share stories, we exalt in the joy of completed journeys, solved problems and happy endings.” – Joe Healy

“The universe is made of stories, not of atoms.” – Muriel Rukeyser

“All human beings have an innate need to hear and tell stories and to have a story to live by. Religion, whatever else it has done, has provided one of the main ways of meeting this abiding need.” – Harvey Cox

“The tales is often wiser than the teller.” – Susan Fletcher

‘Thou shalt not’ is soon forgotten, but ‘Once upon a time’ lasts forever.” – Philip Pullman

“Telling the proper stories is as if you were approaching the throne of Heaven in a fiery chariot.” – Baal Shem Tov

“Austrailian Aborigines say that the big stories – the stories worth telling and retelling, the ones in which you may find the menaning of your life – are forever stalking the right teller, sniffing and tracking like predators hunting their prey in the bush.” – Robert Moss

“We can never know truth, but some stories are better than others.” – Aaron Shepard

“Wherever men have lived there is a story to be told.” – Henry David Thoreau

“Storytelling is about two things; it’s about character and plot.” – George Lucas

“You’re never going to kill storytelling, because it’s built into the human plan. We come with it.” – Margaret Atwood

“The fact of storytelling hints at a fundamental human unease, hints at human imperfection. Where there is perfection there is no story to tell.” – Ben Okri 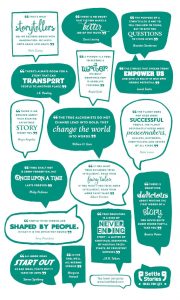 Discover behind the scenes knowledge about our storytellers through their interviews here.

Want to begin your storytelling journey? Have a look at our tips for beginners here.

Go back to Everything Storytelling page.