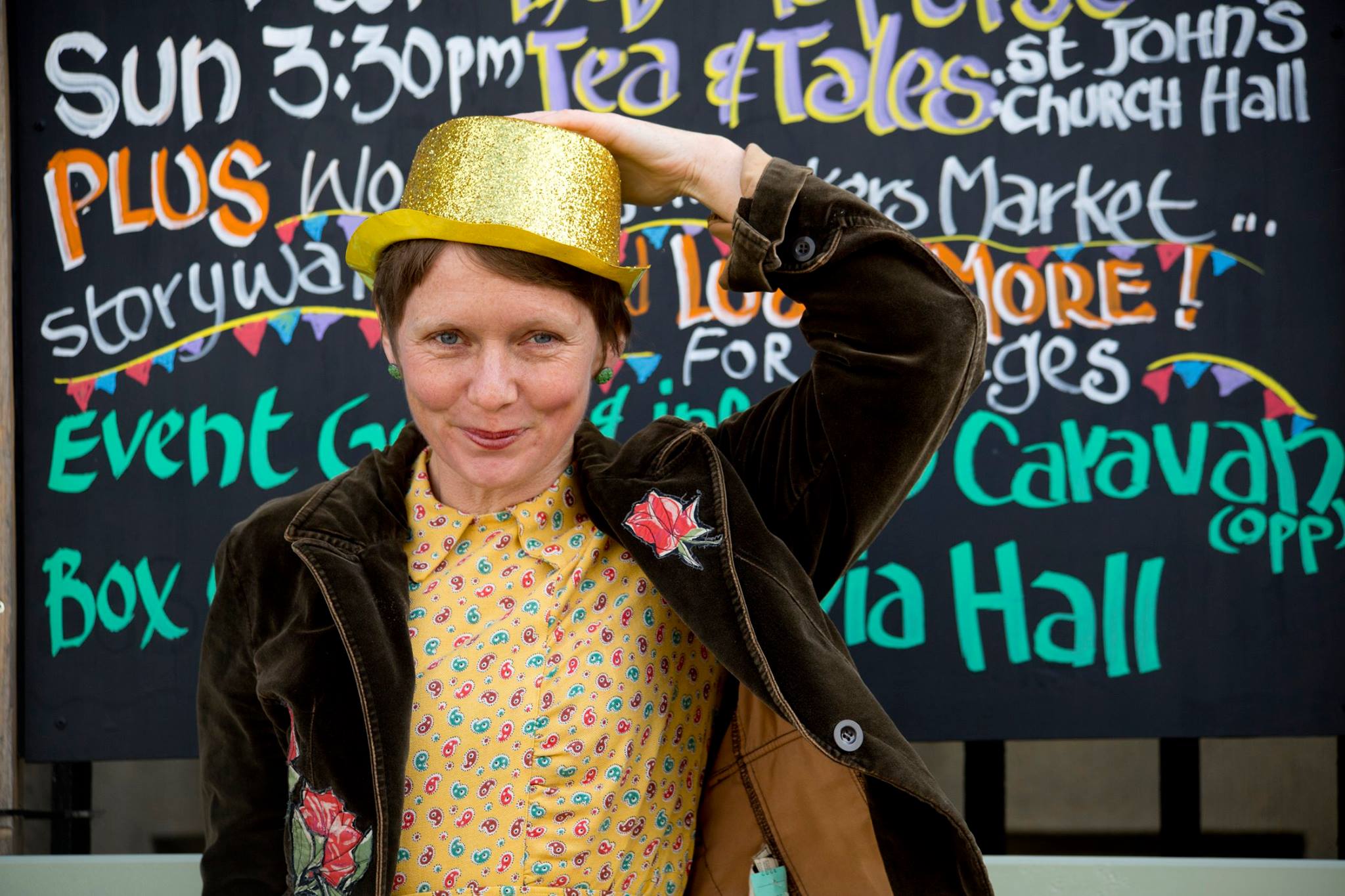 In November 2019 we’ve got the savvy sassy storyteller and ex-Emmerdale star Ursula Holden Gill visiting us at The Joinery. Urusla will be making us laugh and cry with her infamous tales. Tea and lots of scrumptious cake will be provided by Elaine’s Tea Room’s.

One of our volunteers, Jane Corbett, caught up with Ursula before her visit.

You mention your involvement with the Shaggy Dog Story Tellers based in Hebden Bridge. Please tell us a little more about one of the most long standing and highly regarded storytelling clubs in the UK and how you became involved?

I met Christine McMahon (internationally renowned storyteller and then chairperson of the club) when she came to try out Morris Dancing with the local side, I was a member of. At the time, I’d recently made the life-changing decision to walk away from my career as an Actress and retrain as a Drama Therapist (which is what I’d always wanted to do since leaving University). Christine had originally trained as a Drama Therapist before she moved into Restorative Justice with the Youth Offending Team and explained to me that she’d found Storytelling to be massively beneficial to her work – as well as enjoyable. She invited me to go along to the next club night and that as they say, was that.

What inspired you to make the leap from acting to becoming a shape-shifting storyteller extraordinaire?

As I mentioned above, my passion was always Drama Therapy but on leaving University at the age of 22, I was deemed too young to train as a therapist and so was advised to invest in community theatre for a few years while I gained some voluntary clinical experience. During that time, I won a scholarship to attend Drama School, went straight into TV work afterward and so a few years somehow became a decade. As I turned 30, I increasingly got the gnawing feeling that I was way off doing what I’d initially set out to do. Storytelling was (and still is) a significant step back towards that.

As the mainstream curriculum strays further and further away from creativity, why do you think it is so important for schools to keep the art of story telling alive?

Over the years I’ve found that the listening capacity, imagination, communication skills, vocabulary and intrapersonal skills of children and young people are significantly higher in those who have been told stories or read to on a regular basis. I think schools are gradually realising the importance of engaging with children from foundation stage upwards instead of encouraging them to become passive learners by leaving them to access stories and songs via the television. I can tell instantly, by the way a child behaves and participates in a group session or with me as an individual practitioner as to whether they have been told stories or not.

What advice would you give parents to help them make stories come alive and to inspire the next generation of story weaving enthusiasts?

What is your earliest memory of a story?

I had a book called ‘Greedy Nan’ (quite apt for me) which as a toddler I’d get my Mum to read and improvise around pretty much every evening. She must have hated it. I can still recite the book word for word (and am yet to learn the lesson)!

When you are not writing your own, where do you gather your folk tales from? Books? Fellow Humans? Wizards? Elves? Witches?

The landscape really. I’m fascinated by border country; partly because I’m a Lancastrian living in West Yorkshire and so I travel from one county to another on a regular basis; through the crags or over the moors and partly because my Dad is a massive fell walker and so from childhood I’ve had a map of all the significant landmarks of both places firmly fixed in my head. The famous association of the Lancashire / West Yorkshire border with ‘Witches’ is of particular interest to me and very much close to my heart.

What do you feel are the therapeutic benefits of story telling when it comes to dealing with real issues, eg. Bullying, Environmental issues?

Massive! I think that people are much more able to retain information or take on board a tricky subject if it’s presented in a story and as experience has shown (in my work with Adoption, Anger Management, Bullying, Environmental Themes, Identity, Living in Care, Mental Health) are more likely to reflect afterwards and take positive action.

You are coming to the wonderful Joinery in Settle on November 17th at 3.30pm for not only delicious cake and a cup of tea, but to indeed wow us with your sing songs and tales, could you give the audience a little insight as to what magic is in store for them?

This is a tough one. To answer, I’ll quote the review that Mark Whyatt recently gave of my latest story (‘The Girl with the Poorly Leg’ which is due out next Summer) on behalf of the mighty ‘Commoners Choir.’

“Ursula doesn’t describe the world of her stories so much as invite you to see for yourself. Her tales are populated by life’s left behinders, the don’t fit inners, the getting through by the skin of their teethers… but they are not the objects of pity. They are the ones you are rooting for. You walk and run alongside them, wanting them to prevail. Sometimes they fall, sometimes they don’t. Her stories are funny, pithy, heartbreaking, surreal and totally human, usually all at the same time.”

We’re selling out fast! Find out more or book for Tea & Tales here.