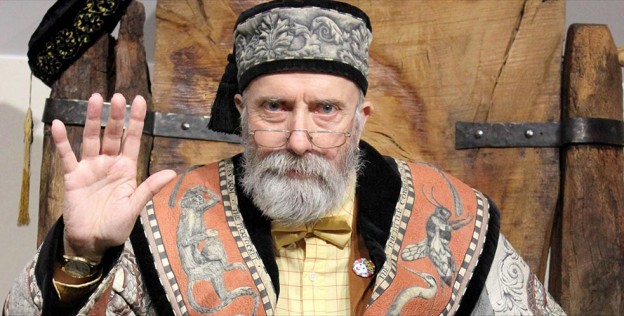 Taffy Thomas trained as a Literature and Drama teacher at Dudley College of Education. He then taught for several years in Wolverhampton. He founded and directed the legendary folk theatre company, Magic Lantern, travelling Europe illustrating folk songs with shadow puppets and much more!

He founded and directed the rural community arts company, Charivari, with their popular touring unit, the Fabulous Salami Brothers, which he fronted and performed in, until a stroke at the age of 36 sidelined him. He turned back to story-telling as self-imposed speech therapy.

Taffy has a repertoire of more than 300 stories, tales and elaborate lies collected mainly from traditional oral sources, which he is happy to tell in almost any situation. He is now the most experienced English storyteller, having pioneered many storytelling residencies and appeared at the National Storytelling Festival in the USA and the Bergen Arts Festival in Norway. In 2001 Taffy performed a new collaboration for the Blue Peter Prom at the Royal Albert Hall.

In 2006 he was storyteller in residence for the programme of summer residencies at the National Centre for Storytelling in Jonesborough, Tennessee.

He is currently artistic director of Tales in Trust, the Northern Centre for Storytelling, in Grasmere, the Lake District. In the 2001 New Year Honours List he was awarded the MBE for services to storytelling and charity. He tours nationally and internationally working in both entertainment and education and is also a patron of the Society for Storytelling.

In October 2009 Taffy accepted the honorary position of first Laureate for Storytelling which will run for two years from January 2010 to January 2012. As Laureate for Storytelling, Taffy received seven wonderful objects as a gift, including: 1kg bag of dried beans, a simple compass, a packet of love hearts, a clear glass bottle, a tall white candle, a silver lucky charm bracelet and a whistle.

“when Taffy goes it will be like a library burning down”.

You can find out more about Taffy here.

You can read about Taffy in our blogs